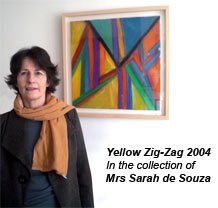 Jackie Pope (neé Godfrey) b.1942,spent her early years in Cornwall, until in 1947, her family moved to Italy, returning to Derby, England in 1952. In 1956 she returned to Cornwall, and from 1958 attended The Penzance School of Art, where she was taught by, among others, John Tunnard, and became aware of the traditions of Cornish art, including the Newlyn School, before studying painting at The Bath Academy of Art, Corsham Court 1960-63.

At The Bath Academy of Art, while learning the more formal aspects of painting from artists such as Adrian Heath, Malcolm Hughes and the constructionist John Ernest, her gifts as a colourist found their most sympathetic response under the tuition of the painters Howard Hodgkin and Robyn Denny. It was of course an inspiring and productive time and included among other things experimentation with stained glass, but there were other significant influences, some historic, which were formative, and have remained so. Perhaps the most important of these historic influences to a colourist was understandably her admiration for the painting of J.M.W.Turner, in particular the sweeping atmospherics of his land and seascapes, as well as the brilliance and purity of the flat colour of Henri Matisse. She is also intrigued by the impressionist paintings of Berthe Morisot, her use of colour and texture to define a very specific space and mood, as well as the metaphysical images of the Italian painter Morandi.

And it is of course impossible to ignore the context of Cornwall, its strong tradition of abstract painting as part of the ambience within which her sensibilities developed. There is the Cornish light, and the whitening brilliance of its elemental skies, and it is perhaps this high key quality she finds so intriguing in the work of the painter Morandi. This dynamic quality of light remains the vital force in the motivation of her painting, and has progressively led since 2013, to the new series of highly controlled paintings in geometric patterns of pure colour.

Painting full-time since her return to Cornwall in 2002, she has since 2007 established a new large studio in Tregajorran near Redruth. She has exhibited at the Belgrave Gallery St.Ives ? Porthmeor? 2004, The Rainy Day Gallery in Penzance, and exhibited in the ? A Postcard from St.Ives? The Belgrave Gallery 2007.

Her works are in several private collections. 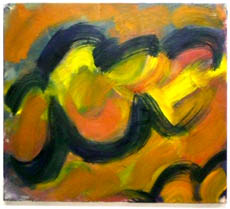 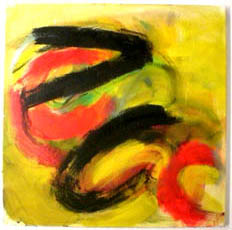